A Exhample of a Skunk works Project

The Truth about Girl

Where to start that is a good question. I suppose the place to start would be form the beginning. Before I was then I was not. Then I was born after being.... whoops too much and to far back. This is the story of my Guitar and how it came to be, it was going to be named "Crazy Eight", "Black Doris", "Almost Doris" or "Girl!". 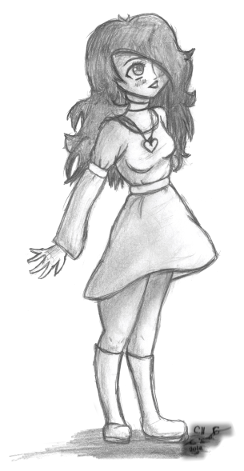 Deep in the mists of my past around 7 or 8. I started to learn the guitar. If I was good or bad It does not matter time has passed and my memory's are what I have left. I was happy then life was simple. At that stage in my life I could read music and could play the clarinet!

Around Collage (High School for those who are not of the Commonwealth) I gave up not for want, but for lack of time and other time consuming activity's, occasionally I would tune it and strum some cords. That was it till one day at some random party with one of my mates I did pick up a guitar and did strum 3 cords and that was that.

During some depression and some thinking about getting my mind right I stated thinking about picking up my old guitar and learn to play it. Off and on I tried and soon decided that my hands where too big for the old 3/4 size thing. So kind of put the idea to rest though did listen to a lot of music and I have lot LP's CD's even tapes. My Woman may even love music more than I do :) .

Around the end of 2011 or the beginning of 2012 I was looking at buying a pre made fender style Strat copy. towards the end of 2012 it was more like thinking of buying some sort of a kit. The kit was going to be like a Gibson Les Pall type, till one Sunday a fiat-full conversation of the merits of Strat vs Gibson LP. The up shot was is if I can't wont don't loose interest a Strat should sell better on the second hand market. So the seed of an idea came to rest in some fertile compost in my mind.

I started looking at Trade Me. What seemed to stick out was a Strat kit. It had a "flamed maple top and a alder body" the neck was a "maple with a maple fret board". Some time passed and it was decided to bid on one should the finances work. Should I bid and tell?

So what happened next? I suppose you've guessed by the effort I have put in to this site that I did finish but was I happy but what did others think? It all starts on the 12th day of December in the year of our Lord 2012 (12/12/2012) I made the winning bid. A day later The Guitar Kit was picked up, The kit included a licensed Floyd Rose set up and twin humbuckers! it was called a "Strat 380 kit". Everything was generic nothing branded only the licensed part and then I have no idea on who made the parts or who put the kit together for marketing. I do know who sold it to me.